This trinity is variously explained in the texts but for our purpose here we consider Ishvara as the creative equanimity ; Shiva as the chaotic destroyer and Vishnu as the one that preserves order. In the galaxies above us the supernovas are bursting with tremendous energies and the black holes are coalescing these under crushing gravitational forces. These are the two extremes of the visible universe and beyond these all scientific explanations seize. The expanding supernovas is Vishnu that is always depicted with agni or fire emanating from it. The root verb ‘ag’ means ‘a tortuous movement’ and the suffix ‘ni’ means in this context ‘to throw out’. So, agni is ‘the flickering of the flame’ that shines and spews forth energy. The opposite is n-agni or nāgini that means a snake, literally ‘a black tortuous movement’ that absorbs energy.

Thus Shiva is portrayed with snakes around his neck. The river Ganges entangled in Shiva’s flowing mane, at another level, stands for ‘Aakash-Ganga’ – the Sanskrit name for our galaxy ‘the Milky-way’.

Shakti, power is the flow of energy between the Vishnu and Shiva back and forth.

Usha is that which keeps getting replenished. ….the rays of the sun ; the flowing rivers ; the sprouting leaves are all examples of this form of Shakti. The reservoir of energy is so huge that we get a feeling of ‘continuity’ in using it. Literally Usha means ‘the dawn’ and Rig Veda, the oldest of the Vedas, is replete with its praise.

Saraswati is the ‘energy that grows’ even though you part with it ! It is like the fruits of a tree that multiply or the dispersion of knowledge or like lighting many candles with one and so on. It is the mythical Goddess of speech and music. The root-verb for this type of increase is ‘brih’ and it is from this that the word Brahman is derived.

■■       The Siva Sutras of Abhinavagupata, cited above, explain the human form in terms of seven aksharas out of the Matrika-chakra . We will next look at these seven bija-mantras to try and understand how the divine symmetries are reflected in our body.

●          The two aksharas , ‘a’ ( A ) and ‘h’ ( h ) are the first and the last letters of the alphabet respectively. The latter is the last of the Sibilants or the Shakti symbols. It is the aspirate and is uttered from the glottis or kantha ‘with an extra force of breath’. In terms of speech, its positioning in the glottis is adjacent to that of ‘a’ ( A ). Interestingly while the ‘a’ (A) sound is present in all the consonants, as discussed earlier, the ‘h’ ( h ) sound is present in half of the alphabet (barring the nasal stops). For example to the ‘ka’ ( k ) sound the aspirate is added to bring about the next letter ‘kha’ (K ). The former is called the alp-prana or ‘lesser life breath’ and the latter is called maha-praṇa or ‘larger life breath’. 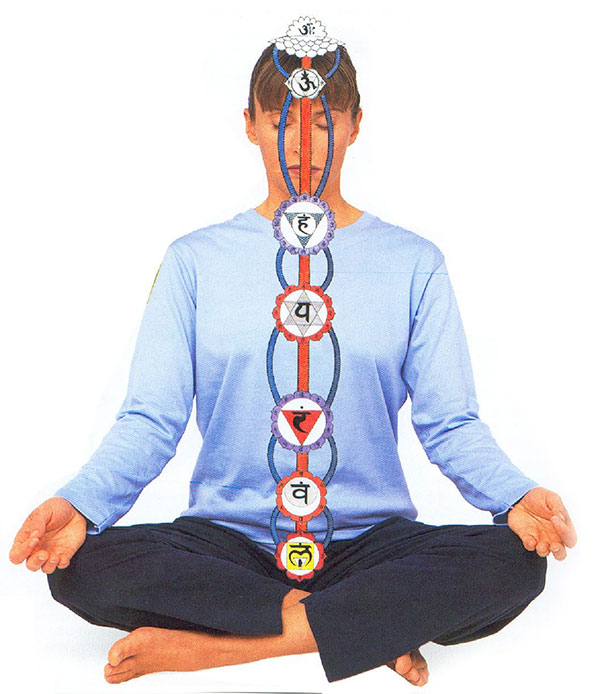 The shlöka II.3.6 of Aitareya Ārāṇyaka explains this :- … ‘a’ is the whole of speech and being manifested through the mutes and the sibilants it becomes manifold and various. If uttered in a whisper it is this prāṇa, if forcefully, that body – sharira. Therefore it is hidden, as hidden as the previous body encapsulated in this prāṇa . But spoken forcefully it is that body and visible, for body is visible. 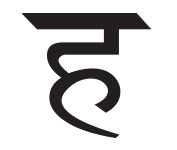 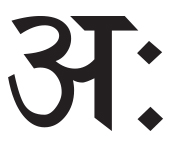 It is both ‘a’ and ‘h’ combined. This is called the visarga sound. As shown in the akshara-wheel , at the top, the visarga is not included in the main alphabet and hence it is termed ayogavāḥ or ‘that which is not part of the harness’. The visarga is the bija-mantra­ for the Sahasarara or the Crown-chakra . Here we see that another level of symmetry emerges – ‘ah’ ( A: ) closes the circle pictorially – signifying the internal/external division of the body or atma. The individual ‘I’ has thus taken form and this is called ‘aham’ ( AhM ). It is the ‘ah’ ( A: ) sound with the Shiva bindu on top of it. Thus there is an inside and there is an outside – with the language of consciousness as the dividing membrane!

The aspirate ‘h’ ( h ) sound is representative of the sharira or the body, as explained in the shlöka above. This is the bija-mantra for the Throat-chakra.

‘a’ ( A ) combines phonetically with the second pure vowel ‘i’ ( [ ) to give ( [+A) – ‘ya’ ( ya ) and this is the bija-mantra for the Heart or Anahata chakra. This signifies the reflection of the Ishvara and the Unknown in the hridaya or the human heart.