The Shiv sūtras were first revealed in the late 8th century A.D. by Shiva  to Vasugupta in person on mount Mahadeva in the Kashmir Himalayas. Later expounded by one of his students Abhinavagupta, this philosophy came to be known as Kashmir Shaivism and is an integral part of the Agamas literature in Hindu thought.

The Spanda-kaarikas are a commentary on the Shiva- sūtras whose authorship is credited to Kallatta, a chief disciple. The first Shlöka of these kaarikas underlines the very act of Creation & Destruction of this ephemeral Universe as the mere blink of Shiva’s eyes:-

We laud that Shankara, by whose mere opening and shutting of the eye-lids, there is the appearance and dissolution of the world and who is the source of the glorious powers of the collective whole of the shaktis in various forms.

Spanda literally means a ‘throb’, a pulsation of energy that spawns all creation. One blink of Shiva’s eyes, the unmesha and the nimesha, releases an intense cosmic pulse that unfolds billions of years of galactic causation. The Unknown in the Shiva- sūtras is the Naad-Brahman and this initial pulse is termed as the Naad-bindu. This is the ‘Big bang’ of Hindu thought and it is from this bindu that the latent Shaktis arise in all their multitudinous, infinite forms onto this mayanvic stage of the senses.

The Shiv sūtras have three Sections viz. Shāmbhavopāya, Shāktopāya and Ānavopāya. The word upāya means a spiritual discipline and is synonymous with Yoga. In the first section Shāmbhavopāya, the goal of the seeker is the Prakash or the eternal light of Shiva. This comes from spontaneous realization and the path actually progresses from Ānavopāya to Shāktopāya and then to Shāmbhavyoga. In this latter stage the plain simple ‘desire’ or iccha of the follower is sufficient to bring about realization. In the words of Jaidev Singh -“When we neither accept, nor reject, when there is simple awareness freed of all idealization, then there is sudden, spontaneous flash of experience of our essential Self : This is Shāmbhava Samāvesha­ – an instantaneous flash of Understanding.”

The Ānavopāya has as its first sutra – “cittam ātmā “… while the first sutra of the Shākta upāya is “cittam mantrah.” It is interesting to compare the two for the difference that underlines their functioning. The word ‘cittam‘ means the entire complex of the mind including the intellect – buddhi, ego – ahamkāra, sub-conscious – antahkarna ; it is the ‘seat of consciousness’. Ātmā is the Self therefore in the Ānavopāya the path to Shiva is through external effort or krīyā. All worldly desires are assimilated into ‘one object or deity’ and all action, that is mostly ritualistic, is focused towards this singular goal. The Self is treated in psychological isolation from the Whole i.e. is it is Anu or ‘individually encapsulated’. And hence the name of this Section is Ānavopāya but is also known in other contexts as krīyā-yoga.

The Shāktopāya, on the other hand, adopts the path of jñāna or pure knowledge. The medium of inquiry is the ‘consciousness’ or Vimarsha and here one has to make use of the ‘citta-shaktī ‘ or mental energy. The mind is the laboratory and the structure of the ‘mantra‘ is the process and thus the first sutra – “cittam mantrah“. The adoption of the appropriate mantra is the essence of this practice. The Shāktopāya says that it is not possible for most people to be free of desires or vikalpa in the normal course. They are subjected to the temptation of a variety of ‘wrong desires’ or ashuddha-vikalpa. Then what is the way forward?

Citing Abhinavagupta, Jaidev Singh explains[2] – “Catch hold of one shuddha- vikalpa. That will prove to be a veritable boat by which we can cross the turbulent waters of phenomenal existence and safely land on the certain ground of our noumenal Reality. In the following passages, Abhinavagupta clearly explains the nature of ashuddha and  shuddha-vikalpa. regarding ashuddha-vikalpa, he says :

‘People consider themselves bound on account of ashuddha-vikalpa. This wrong  conception of theirs about themselves becomes the cause of their being bound in  trans-migratory existence. Therefore when an opposite vikalpa arises, it dispels the  vikalpa that is the (earlier) cause of trans-migratory existence and thus becomes the cause of their (the people’s) elevation.’

Ashuddha-vikalpa or ‘misconceptions’ are those ideas and beliefs on account of which one considers his psycho-physical organism, his mind-body complex to be the Self. ‘I am thin, weak, ignorant etc.’ are examples of ashuddha-vikalpas. “

“What then is shuddha-vikalpa (correct mental attitude and belief)? This is what Abhinavagupta has to say :

‘That which is unlimited consciousness transcending all limited expressions of Reality from the earth right up to Shiva, that alone is the highest Reality; that am I. Therefore I am both transcendent to and immanent in the Universe.’

The shuddha-vikalpa is the idea and belief that I am the met-empirical, transcendental  Self; that the Universe is an expression of my power, etc. that is (the Shakti of consciousness or Vimarsha).”

■■       “The practice of this shuddha-vikalpa is the Shāktopāya. A question that arises here is –      Can the highest Reality or parama Shiva be ever brought within the range of vikalpa ?…. because that would mean that the highest Reality can be brought within  the province of thought. And, if not, then what is the utility of this shuddha-vikalpa ? “

In this paper, we will attempt to answer this question….

Let us first understand how the concepts of Shiva- sūtras resonate with the vast body of Vedic literature. The word sūtra literally means ‘a thread’ and interestingly, we see that the following sūtra II.7, helps us in unraveling the essence of Shāktopāya. It states[3] :-

“( From a pleased Guru ) accrues enlightenment regarding the ‘group of letters’.”

Now the first sūtra – “cittam mantrah“, as discussed above, clearly indicates the way to subdue the ‘chatter’ of everyday life in our citta or consciousness, is to commence with a mantraḥ as a shuddha-vikalpa. Make this the summum-bonum or the ‘highest goal’ of one’s life and then neutralize it to empty one’s mind along with all its worldly desires, to achieve a state of tabula-rasa –  a mind like an empty slate.

The mantrās, however, are constructed of words and letters and these letters are the mātrikā shaktīs. As we will now see this mātrikā or the ‘string’ of Sanskrit alphabet reflects within itself the symmetry of the Universe and its creative principle. The mātrika-chakra literally meaning the ‘Mother-wheel’. These are arranged in a circle or chakra much like the beads in a rosary and each letter has its individual universal resonant energy, a Divine Shakti . 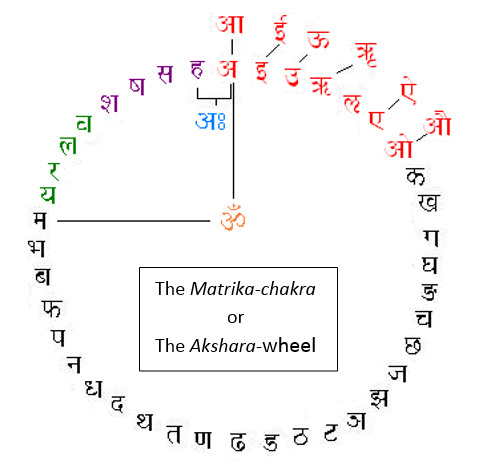 A single letter of the alphabet in Sanskrit is called akshara. In the Upanishads Brahman, the Unknown, is also called akshara.[4] For, akshara has neither any substance nor does it possess any attributes. It is indestructible and undifferentiated. That which is dissoluble and melts away is called kshara and the opposite is a-kshara where the prefix ‘a’ denotes the negative. In other words akshara is to be first understood as the Imperishable, the constant in the universe, it is the Brahman and is the very pivot of this creation.

The word aksha also means the axle or the beam on which the cart’s wheel is balanced so akshara is T.S. Elliot’s ‘still point’, ‘the fixity’[5] about which all things rotate but itself remains unmoved. This unbounded sphere ‘whose centre is everywhere and the circumference nowhere’ finds an egocentric limitation, an adjunct within the individual self. This human body is endowed with the organs of speech and here the meaning of akshara becomes the syllable – a small utterance. And this is ‘a’ ( A ) – the first letter of the Sanskrit alphabet.

The Sanskrit alphabet, unlike English, has the collection of vowels as a primary list called svars . The consonants are a secondary list and are called vyanjan . The svars are the ‘shining’ sounds and the vyanjan are the ‘reflected’ sounds. In the diagram above, the letters in red are the svars , the vowels. These are 13 in number and if ‘a’ ( A ), that stands for Brahman , the Unknown is suppressed we are left with 12 – the number of sun-signs. The vowels are like the day and they are the ‘shining ones’. They contribute the mātrā or the meter and timing to the words and the mantras. 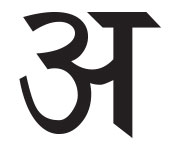 The first svar is ‘a’ and it is added to the end of every consonant. From there it integrates into every word and sentence. Thus ‘a’ ( A ) , the Brahman becomes “woven into the warp and woof of everything” in the words of Late Dr. S. Radhakrishnan. This structuring is unique to the Sanskrit language.