Brahman is called ‘a’ ( A ) and the individual ‘I’ is there contained.

I am the letter ‘a’ among the vowels of the alphabet and the dwanda compound in relation to the words collectively. I am endless time. I am the Dispenser facing everywhere.[20]

Lord Visnu himself proclaimed – I am the ‘a’ among the vowels.

Now ‘a’ ( A ) is the immutable, the symbolic Unknown – if, this is the ‘whisper’ –as explained in Ait. Ār. II.3.6 above, then as we force the breath just a little, what we get is its aspirate sound ‘ah’ ( Ah ). This can also be written as ( A: ) which is the visarga sound, and is grouped as ‘a-yogavāha’ meaning : “those (sounds) that occur (in the actual language) without being part of the alphabet” ….another very interesting aspect of the structure of Sanskrit language !

If we see the Fig.3 – another level of symmetry emerges – ‘ah’ ( A: )[22] closes the circle pictorially signifying the internal – external division . The ‘individual ego’, the ahamkār ( AhMkar ) has taken form – there is an inside and there is an outside – with the language of consciousness as the dividing membrane ! 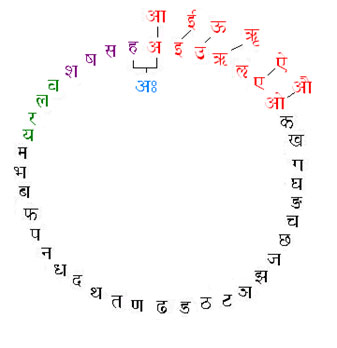 The last but not the least is the affirmation of this by twin shlökas of Brihad-āranyaka Up. V.5.3 & 4 – the 1st shlöka says that at the beginning of this You-niverse there was just water and from this germinated satyam, the truth which is likened to the Brahman (this shlöka gives the three syllables of satyam cited earlier). The 2nd shlöka says – what is true is the yonder sun ādityah. The purush who is there in the mandal and the purush who is here in the right eye, these two rest in each other. The 3rd shlöka invokes the Gāyatrī equating the head, arms and the legs to bhū, bhuvah, svah and says that the name of the purush in the mandal is ‘ah’ ( Ah: ). The 4th shlöka is identical to the previous except for the name of the purush in the right eye, it is aham (AhM ). 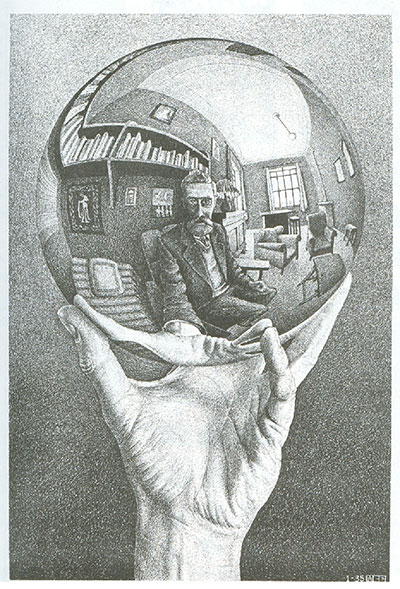 This is the Eastern basis of the Anthropic Principle. The Vedas are very firm on this Principle – “The world is because ‘I’ the individual consciousness am there to observe it – ‘I’ create my own māyā”. But before we go on to that let us look at the code & symmetry which I see in the Sanskrit language and I feel the basis of any new educational program should be to decipher this knowledge meticulously – based on metaphors, mathematics, science…..

◊       Erwin Scrhödinger was one of the main exponents of QM and was responsible for combining the wave and particle duality in one mathematical framework – called Complex Numbers. As we count backwards – let us say from 5 we go 4, 3, 2, 1 and we reach zero[23] , which is our famous, universally accepted contribution to the numbers game. Beyond this start the negative numbers or -1, -2, -3, and so on. Any number can be ‘squared’ that is multiplied by itself however the reverse is only true of positive numbers. That is the ‘square root’ of 4 is written as √4 and is the number 2 – because 2 X 2 = 4. The ‘square root’ of three is not a whole number but it can show up on a calculator as 1.73205…and when this is multiplied by itself we come back to 3 or 2.9999 (due to calculator decimal limit)…However there is no square root of -1, or √-1 is an undeterminable quantity and can only be represented by a symbol. And this symbol is ‘i ’. (This actually stands for the word imaginary since these numbers originated in the 16th century as ‘imaginary’ solutions for the quadratic and cubic equations of Algebra[24]). A Complex Number ‘ z ’ is written as…..

z = a + i b ……here ‘a’ is called the real part and ‘b’ the imaginary part. The beauty of this formalism is that we can do all sorts of arithmetical jugglery with   ‘ z ’ as if it is just one variable but it carries with it two concepts simultaneously – that of the real ‘a’ and that of the unreal or imaginary ‘b’. And this is exactly what Scrhödinger used to integrate the duality of QM[25]. He carried the ‘particle’ concept of matter as the real part and the ‘wave’ concept as the imaginary part of the Complex Number and instead of ‘ z ’ called the variable ‘ψ ’, the Greek letter ‘psi’. (looks like the trishul doesn’t it !) [26]. This was one of the major breakthroughs of early 20th century science and the entire basis of semiconductors and subsequent electronic revolution is based on this synthesis.