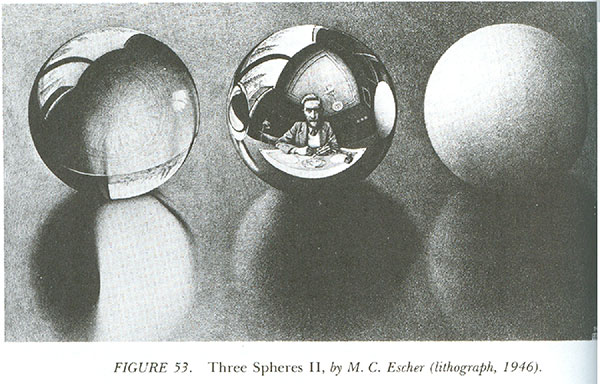 Hofstadter, in his book Gödel, Escher & Bach – “Consider ‘The Three Spheres’ in which every part of the world seems to contain, and be contained in, every other part: the writing table reflects the spheres on top ofit, the spheres reflect each other, as well as the writing table, the drawing of them, and the artist drawing it. The endless connections which all things have to each other is only hinted at here, yet the hint is enough. The allegory of “Indra’s Net” tells of an endless net where every individual ātmā is a crystal bead. The great light of “Absolute Being” illuminates and penetrates every crystal bead; moreover, every crystal bead reflects not only the light from every other crystal in the net – but also every reflection of every reflection throughout the universe…..To my mind, this brings forth the image of renormalized particles: in every electron, there are virtual photons, positrons, neutrinos, muons and so on each in every other….But then another image rises: that of people, each one reflected in the minds of many others, who in turn are mirrored in yet others, and so on.

◊       Let us then look at the Sanskrit Alphabet itself, its varnas ( vaNa- ) , its structures, its symmetries…. 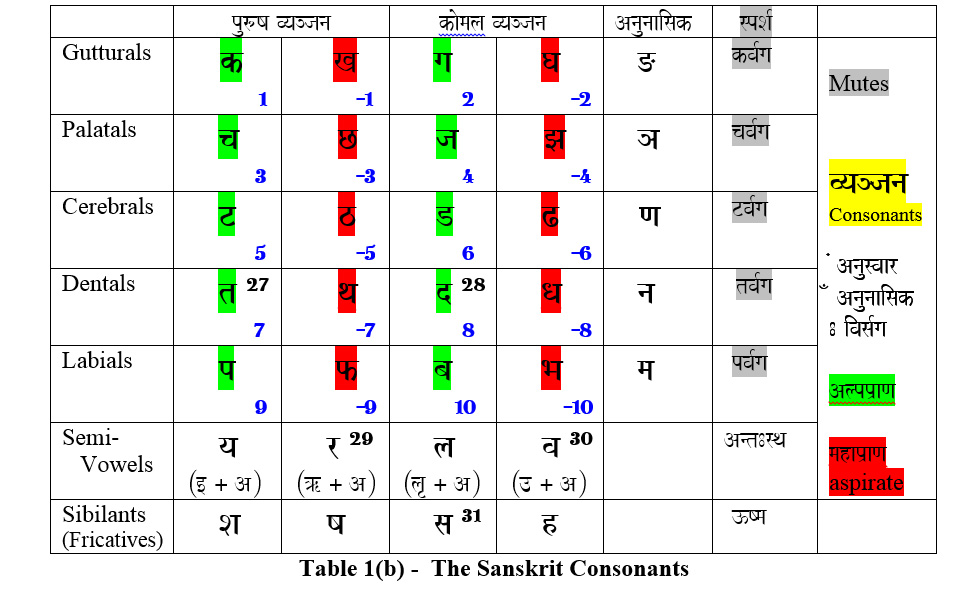 Notes for the Sanskrit Alphabet – for extempore explanation

( A ) and ( [ ) are explained as two Infinities – pūrnam adah ( Ad: ) & pūrnam idam ( [dma\ ) in the Shānti Pāth. This links beautifully with Cantors’ theory of Transinfinite cardinals – where the ‘countable infinity’ is …. αº (aleph-naught) ; the uncountable infinity of the continuous line e.g. is …. α¹ (aleph-one), and Omega that which cannot be reached.[38]

[To my mind like ( A ) is symbolically and akin to √-1 , similarly the other 3 primary vowels also have possible other mathematical symbolic representations. As a suggestion this could work on the lines that ( [ ) is the exponential ‘e’; ( ] ) is like π and ( ? ) is like the number system ?? There is a mathematical coding….but this needs to be investigated further.]

The mutes also begin with ( kM ) as Prajāpatī and ( KM ) as shūnya or zero. Both are also equated to Brahman representing the increasing side and decreasing side of creation.

shri is the countable domain. Here the energy transactions are conserved. That is what leaves one spot diminishes from there and increase at the receiving end. Oct 01, 2003
by admin
0 Comments
Hofstadter, in his book Gödel, Escher & Bach – “Consider ‘The Three Spheres’ in which every part of the world seems to contain, and be contained in, every other part: the writing...