Brahman – Ishvara , here the first term indicates Infinite being and possibility, and the second suggests creative freedom. Why should the Absolute Brahman perfect, infinite, needing nothing, desiring nothing, move out into this world ? It is not compelled to do so. It may have this potentiality but it is not bound or compelled by it. It is free to move or not to move, to throw itself into forms or remain formless. If it indulges its power of creativity, it is because of its free choice. 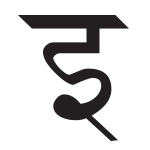 The Vedic equivalent of Ishvara is Lord Indra . The Aitareya Upanishad I .3.14 explains why Indra is so named. Idam means ‘this’ and ‘that which can be seen’ is idam adarsham. This is shortened to idamdra and further to Indra, a cryptic version ‘because the Gods like mysterious names’. In essence Indra like Ishvara is the perceivable projection of Brahman .

The compilation of entire knowledge is the ‘universal song’, Gītā. In its full form it should be called ‘udgītha’ . ‘Ud’ means ‘to evolve’ and ‘ut’ is the ‘life breath’ or prana ; coupled with speech this vital breath gives ‘name and form’ to all things in this conscious universe.

Ishvara is the eternal order. It can be sensed, yes, but yet it is strangely uniform, devoid of any dimensions of space, time and so forth. This is the samsara , the Sanskrit word for the world. Sam means ‘the same everywhere’. Sara means ‘the essence’. In this dimensionless world the only disturbance, according to the Vedic Hymns of Creation, is a thought – “Let me be” – the Creator’s need to have a Self. This ‘thought’ disturbs the Uniformity, the Order, giving rise to the Chaos & Order dichotomy. The dimensions unfold and the Creator, Preserver & Destroyer trinity takes form. This trinity is variously explained in the texts, but for our purpose here, we consider Ishvara as the creative equanimity ; Shiva as the chaotic destroyer and Vishnu as the one that preserves order. In the galaxies above us, the supernovas are bursting with tremendous energies and the black holes are coalescing these under crushing gravitational forces. These are the two extremes of the visible universe and beyond these all scientific explanations seize. The expanding supernovas is Vishnu that is always depicted with agni or fire emanating from it. The root verb ‘ag’ means ‘a tortuous movement’ and the suffix ‘ni’ means in this context ‘to throw out’. So, agni is ‘the flickering of the flame’ that shines and spews forth energy. The opposite is n-agni or nāgini that means a snake, literally ‘a black tortuous movement’ that absorbs energy.

Thus, Shiva is portrayed with snakes around his neck. The river Ganges entangled in Shiva’s flowing mane, at another level, stands for ‘ākāsh-Gangā’ – the Sanskrit name for our galaxy ‘the Milky-way’.

Shakti, power is the flow of energy between the Vishnu and Shiva back and forth. Each letter of the mātrika-chakra has its individual resonant sound and these combine as root verbs, words, shlökas and mantras to enable the ‘naming’ and ‘explaining’ of each and every aspect of life and its concepts. The multitudinous variety of these names and their possibilities far exceeds the Cantor’s ‘numerable infinite’ and this is how the following sibilants – the “Shakti” symbols or Ūhsma are delineated…

sh ( Sa ) – Shri Lakshmi is the Goddess of wealth, worldly goods and material acquisitions. It is the favourite of the Hindu trading community. This stands for all transactions that move the count. That is what diminishes from one place increases at the receiving end. Let us say, I give you money, it reduces with me, but adds to your account.

shh ( Ya ) – Ushha is that which keeps getting replenished. ….the rays of the sun ; the flowing rivers ; the sprouting leaves are all examples of this form of Shakti. The reservoir of energy is so huge that we get a feeling of ‘continuity’ in using it. Literally Ushha means ‘the dawn’ and Rig Veda, the oldest of the Vedas, is replete with its praise.

sa ( sa ) – Saraswati is the ‘energy that grows’ even though you part with it ! It is like the fruits of a tree that multiply or the dispersion of knowledge or like lighting many candles with one and so on. It is the mythical Goddess of speech and music. The root-verb for this type of increase is ‘brih’ and it is from this that the word Brahman is derived.

This leads us to ha ( h ) – the ‘fourth’ Sibilant or Ūshma which is the ‘aspirate’ sound situated at the gullet or kaṇṭaḥ …. Interestingly ha ( h ) is the bija-mantra for the ‘throat-chakra’…

■■       The Shiva Sūtras of Abhinavagupata, cited above, explain the human form in terms of seven ‘energy-centers’ or Shakti-chakras. Each body chakra has a seed-sound called the bija-mantra associated with it. We will next look at these seven bija-mantras to try and understand how the Shaktis of the mātrika-chakra are reflected in our body.