We laud that Shankara by whose mere opening and shutting of the eye-lids there is the appearance and dissolution of the world and who is the source of the glorious powers of the collective whole of the shaktis in various forms.

From time to time, our land has given rise to enlightened souls called Avatars. These rare persons have often taken birth in turbulent times of external invasions or internal decrepitude. They have all led exemplary existences and one such embodiment was Vasugupta, the main exponent of the Shiva- sutras. These sutras or ‘condensed mantras’ were first revealed, in the late 8th century A.D., by Shiva directly to Vasugupta on mount Mahadeva in the Kashmir Himalayas. Later expounded by one of his students Abhinavagupta, this philosophy came to be known as Kashmir Shaivism and is an integral part of the Agamas literature in Hindu thought. The Spanda-kaarikaas are a commentary on the Shiva- sutras whose authorship is credited to Kallatta, a chief disciple.

Spanda literally means a ‘throb’, a pulsation of energy that spawns all creation. One mere blink of Shiva’s eyes, the unmesha and the nimesha, releases an intense cosmic pulse that unfolds billions of years of galactic causation. The Unknown in the Shiva- sutras is the Naad-Brahman and this initial pulse is termed as the Naad-bindu. This is the ‘Big bang’ of Hindu thought and it is from this bindu that the latent Shaktis arise in all their multitudinous, infinite forms onto this mayanvic stage of the senses.

The Vedas give the first division of the manifestation of these energies as kram, naam and rupa. Action is kram and finds its aesthetic expression in dance or nritya of which the tandava of Shiva is one example. Naam is literally name or nomenclature and the Shiva- sutras explain this as the matrika or the sounds of the Sanskrit alphabet. But as a scholar, my understanding of the rupa or the form aspect of our heritage was limited to the mythological figures and frescoes. That is, till I accosted Satish’s works on the Cosmic matrix and his intuitive sketches presented here in this work on Shiva. Then again, as I stood before his copper masterpiece, Shiva’s head, I could feel the Universal spanda in my goose pimples. Each one of those 15000 or so copper plates was ‘nameless’ and indistinguishable, like the leaves of a tree. Each plate had ‘no regular form’ and yet the ‘intense action’ of the sculptor had given these small fractals a larger symmetry that pulsed with its own Universal name and consciousness.

The trinity of Indian philosophy – Brahmaa, Vishhnu and Mahesh have as their consorts the three Shaktis – Saraswati, Shri-lakshmi & Parvati and we are all familiar with these deities and their Puranic myths. However, as we are going to see, all this is based on powerful metaphysical concepts and Satish, as an artist, has intuitively touched upon this in the accompanying sketches at various levels.

Brahmaa, the Creator, in the myths is Brahman, the Unknown in the Vedas. The root verb √brih means ‘that which grows’ and Brahman, the Unknown cannot be directly observed except for its power to expand. This power is therefore given to its consort Sati or Saraswati. Saara is ‘essence’ and swa is ‘self’ therefore Saraswati reflects the unlimited expansive potential of the individual consciousness. The third letter ‘sa’ amongst the sibilants of the Sanskrit alphabet signifies this exponential growth. One of Satish’s sketches depicts this beautifully with an upward spiral, emerging as if from a bindu, traversing its path towards the ‘third eye’, the seat of the bindu-chakra.

In terms of rigorous logic if Brahman, the Unknown manifests, it relegates Itself! This epistemological problem is circumvented in Indian thought by introducing the concept of Isha. This is the abbreviation of idam adarsham or ‘that which can be seen’. Isha is synonymous to the Indra of the Vedas and colloquially it is Ishvara. Its realm should be understood as the uniform, eternal order devoid of any dimensions of space, time and so forth. This is the samsaara. Sam means ‘the same everywhere’.

Why does Brahman require ‘two’ epistemological concepts? Saraswati is the information of the Universe that mirrors internally within our minds and being reflective it is the female principle. Isha is the translational principle and is external to us. It refers to the massive growing energies of the Universe that have evolved over eons to bring us about. It is like making an identical, symmetrical replica of a much larger entity and hence it is the male principle. Shiva is therefore also called Maha-Isha or Mahesh and the two principles combine to give us the Ardhanaareshwari form of Shiva. This idea has been beautifully brought out by Satish in the fine feminine features of his sculpture.

When we as humans look back at the world we perceive only movement. Einstein rigorously showed us how every bit of matter is energy and that it is perpetually moving relatively to others. There is no ‘still point’ as T. S. Eliot also points out in his ‘Four Quartets’. This is also the subject of the first verse of the Isha Upanishhad. One can almost feel these moving vibrations in Satish’s sketches.

This movement of Isha manifests as the dichotomy of Vishhnu and Shiva. ‘Vi’ as a prefix in Sanskrit means ‘flying away’ and ‘anu’ means ‘the tiniest form of matter’. Vishhnu is therefore the expanding, emanating energy that is spewing out in discrete amounts from the supernovas at the galactic level and from the sun in our immediate solar system. The consort of Vishhnu therefore is Shri-lakshmi and this form of Shakti is discrete. It is represented by the first sibilant letter ‘sha’ and its test is that it reduces by giving, it disperses. Saraswati, on the other hand, increases and grows by giving. Vishhnu is all that shines in the visible Universe.

In terms of etymology, Shiva is the opposing force of Vi + Isha. Shiva therefore represents the intense coalescing forces in the Universe. It is all the dark matter and its Shiva’s power that collapses the black holes to the centre of each galaxy. But, closer at hand Shiva is the reservoir of the terrestrial energies. His abode metaphorically is the mount of Kailash and he sits there with his consort. Parvati is the re-incarnation of Usha and this is the Shakti that keeps getting replenished. ….the rays of the sun; the flowing rivers; the sprouting leaves are all examples of this form of Shakti. The reservoir of energy is so huge that we get a feeling of ‘continuity’ in using it. The second sibilant letter ‘shha’ signifies Usha.

Shiva’s matted hair and the Chandra or ‘half-moon’ adorning it symbolize the anunasik or the ‘nasal-hum’. The anunasik is also the name of a class of letters in the last and fifth column of the table of mute-consonants in the Sanskrit alphabet. These letters are themselves five in number and signify the five primal elements of creation. This Chandra-bindu, as it is also called, is the sound of ‘aum’ – the universal mantra of yogic chanting. 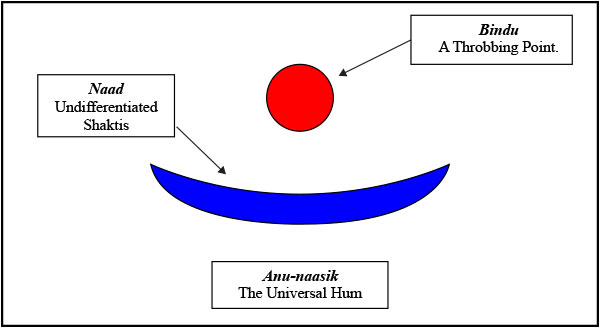 Vishhnu is often depicted with flames or agni emanating from Him and Shiva has snakes or naagini around His neck. The root verb ‘ag’ means ‘a tortuous movement’ and the suffix ‘ni’ means in this context ‘to throw out’. So, agni is ‘the flickering of the flame’ that shines and spews forth energy. The opposite is na-agni or naagini that means literally ‘a black tortuous movement’ that absorbs energy.

The river Ganges entangled in Shiva’s flowing mane, at another level, stands for ‘aakash-Ganga’ – the Sanskrit name for our galaxy ‘the Milky-way’.

All this and much more flows from Satish’s hands in this unique unison of sculpture and sketches. And I stop to wonder – Is it possible that in some strange manner the original Gupta author’s of the Shiva- sutras have again found a worldly resonance in Satish Gupta’s art?