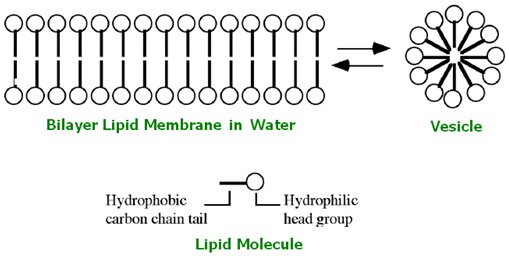 The chemistry of this crucial process is surprisingly simple and common. It is based on the electric polarity of water. Because of this polarity, certain molecules are hydrophilic (attracted by water), while others are hydrophobic (repelled by water). A third kind of molecules are those of fatty and oily substances, known as lipids. They are elongated carbon structures with one hydrophilic and one hydrophobic end. (See Picture)

When these lipids come in contact with water, they spontaneously form various structures. For example, they may form a mono-molecular film spreading over the water surface or alternatively they may form an even more complex double layer of molecules with water on both sides, as shown in the Picture. These single or double layers can form droplets, which are the membrane-bounded vesicles. These double-layered greasy membranes show a surprising number of properties similar to contemporary cellular membranes. They restrict the number of molecules that can enter the vesicle, transform solar energy into electrical energy and even collect phosphate compounds inside their structure.

Lipid vesicles, then, are the ideal candidates for the protocells out of which the living cells evolved.

This was the first semi-permeable boundary between the “outside” and the “inside”; the first distinction between self and non-self.[10]

The protocells were the hotbed of a lot of molecular activity. Complex chains of linear polymers of carbon compounds gave rise to life-building amino acids, nucleotide and simple sugars. As the molecules became bigger their chemical reactions became ‘auto catalytic’ and cyclic i.e. the derivatives promoted further generation of themselves and related products. These hyper-cycles were possible due to accumulation of energy within the first cells and more complex protein, DNA and RNA structures arose. This is the very point at which non-sentient matter gives ‘life’ to sentient cell structures. The energy accumulation inside spherical protocells pushed the chemical reactions to ‘far from equilibrium’ levels of energy, thereby creating more complex structures called “dissipative structures” which have self-organizational capability. If we look at this in terms of systems development then, this higher level of self-generating capability is called ‘an autopoietic organization’:-

From dissipative structures and hypercycles emerged the chain of nucleotides, ribose, and phosphate that can both replicate itself and catalyze chemical reactions.[11]

First, the molecular components of a cellular autopoietic unity must be dynamically related in a network of ongoing interactions. Today we know many of the specific chemical transformations in this network, and the biochemist collectively terms them “cell metabolism”.  Interestingly, this cell metabolism produces components which make up the network of transformations that produced them. Some of these components form a boundary, a limit to this network of transformations. In morphologic terms, the structure that makes this cleavage in space possible is called a membrane. (Underlining by me) ….. What we have, then, is a unique situation as regards relations of chemical transformations: on the one hand, we see a network of dynamic transformations that produces its own components and that is essential for a boundary; on the other hand, we see a boundary that is essential for the operation of the network of transformations which produced it as a unity:…… The most striking feature of an autopoietic system is that it pulls itself by its own bootstraps and becomes distinct from its environment through its own dynamics, in such a way that both things are inseparable. Living beings are characterized by their autopoietic organization. They differ from each other in their structure, but they are alike in their organization. [12]

This controlled electron energy decrement is something not seen in the organic world. Something radically new has been added to the universe in this process. The kinds of abrupt shifts in the inorganic world like ionizing radiation, radioactivity etc. is actually destructive to living systems.[14]

The evolution of photosynthesis is undoubtedly the most important single metabolic innovation in the history of life on the planet. It occurred not in plants, but in bacteria.[15]

It is very clear from the above excerpts that inorganic matter over the 3 billion years or so of evolution has carried the complexity of bio-chemistry through varying layers of complexity. From the merging of electron probabilities in the benzene ‘p – bonds’, to the coming together of bio-chemical ‘hypercycles, to the structure of the first simple cell – the prokaryote, to the emergence of the first single-cell eukaryote with the ‘whip’, to the multicellular mammals there are different dimensions of emergent phenomena. H.J. Morowitz[22] uses his expertise in Biology and Complexity to actually explain 28 steps of emergence for human evolution.