According to modern geometry the point is the minutest unit with which a line is drawn. The point is indivisible and without length and breadth. When we think of bindu as the minutest unity we are reminded of the concept of paramānu ( Vaiśesika defines paramānu as : mūrtatve sati niravayavah : being limited, it is without any body part ).

In Yogabhāsya of Vyāsa we find that a substance when reduced to its minutest unit is called paramānu , and in the same way the minutest time unit is called ksana. But bindu is neither a time unit like ksana nor a space unit like anu. It is a unit of consciousness , and at the same time becomes body of the material world.

It reminds me of T. S. Eliots’ poem ‘Four Quartets’ in which he refers to a ‘still point’ that is ‘more than a fixity’. I quote from the First Quartet called ‘Burnt Norton’ :- 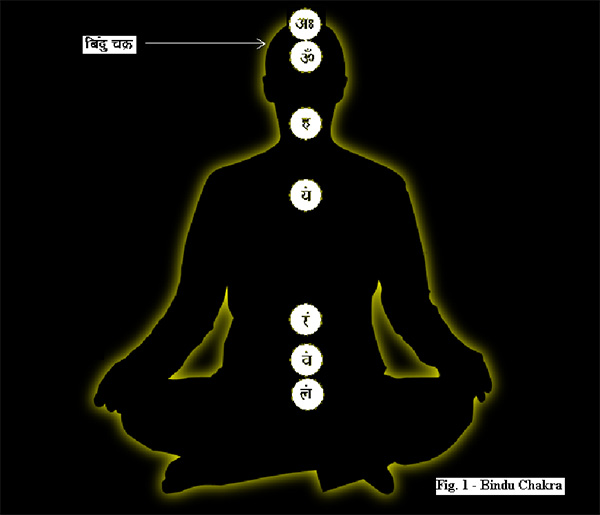 In essence this bindu is a drop of incessant energy which has enfolded vibration but it is ‘non-sound’ or anāhat. That is also the name of the fourth, the heart-chakra. It resonates to a Universal Hum and in Aitareya Āranyaka I.3.1 while explaining the beginning of the offspring from ‘hmm’ , the rishī says “the word is masculine and its cadence feminine…. Again with regard to his (the offspring’s) beginning with the word ‘hmm’, the word is the discrimination of divine and human speech”. This should be understood as the first spurt of soundless prāna from the bodhi chakra to the anāhat or heart chakra inciting the first heartbeat in the womb, the first breath. Thus, in the vedic sense, the seat of cidākāśa, the infinite dimension of undivided consciousness is the hrdya or the heart, although, the antenna is the bindu chakra. The breath or vāyu rises from the lower chakrās to the throat, the seat of the fifth chakra – the viśuddhi chakra, to merge with the prāna from the heartbeat. This first cry is the pranav and is often used synonymously with the sound of ‘aum’ in vedic literature. However, they are different, the former is symbolic of evolution and the latter of the involution of prānic energy. When the conch shell is blown in vedic rituals it is this pranav that is magnified and when we chant inwardly it is the nasal sound of ‘aum’ that resonates in our cranial cavity.

So, in the Vedic essence, the spark of the soul survives death and sits in the marīchi – the Multiverse Level II, where all intentions are feasible. A region way beyond our direct senses but yet inextricably linked to our minds through our desires, the swapna. And here the antic waits its turn to re-incarnate…….

Oct 01, 2003
by admin
0 Comments
Hofstadter, in his book Gödel, Escher & Bach – “Consider ‘The Three Spheres’ in which every part of the world seems to contain, and be contained in, every other part: the writing...