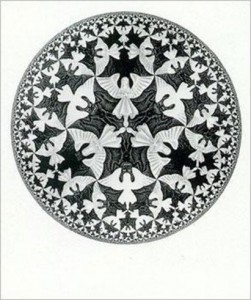 The Circle of Life
by M. C. Escher

Paper presented at the International Seminar on

Organized by Centre of Linguistics and English, Jawaharlal Nehru University

“ Gauri is the symbol of vāk or speech, according to the shrutīs …. the real significance is that the principle of vāk creates or fashions out the manifold forms out of the waters of the infinite ‘ocean of reality’ … the parme vyöman. You cannot cut forms or draw lines in water, you can do that only in space but ; but reality like water is continuous, indivisible…”

The word used here for ocean is salilâ which actually means the surging of waters, the expression here alludes to an agitated ocean, one in which the waves are being whipped up by the rage of the wind ; for salilâ also means a kind of wind . Thus speech is the giving of form to the upsurge in the consciousness – the innate desire for expression. And it is this desire that leads to the structuring of prānic energy into various meters and sounds.

At the very end of the Rig Veda – in the 10th mandala viz. X.190.1 to 3 the creation myth is given in its condensed form. Here the “ocean of energy” is called both the samudra and arnava. These various expressions explain the multiple states of the “ocean”…. samudra expresses the uniformity as viewed deep within the sea, while arnavah is the billowy-agitation on its surface. The word arnava is the group word for varna. What this means is that the external reality unfolds from arnava, the waves on the boundary of the vast “ocean of energy” and this reflects into our consciousness as so many varnas which are fashioned into manifold internal expressions to interpret this reality. As we will see ……….. 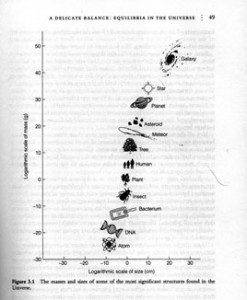 The Sanskrit alphabet reflects these macro and microcosmic symmetries in an elegant arrangement of varnas that can give rise to virtually any colloquial sound.

In a linear, idealistic world energy lends itself to simple cause and effect solutions – I push this object and it moves forward – in a ‘Non-linear’ equation this is not so. A push here may not result in an immediate effect there, the effects may collect over ‘space and time’ zones to precipitate entelechies, (insert definition) sudden occurrences or epiphanies which seem totally disconnected. Or small effects can cause huge changes. The advent of super-computers in the 1980s actually brought about the detailed study of these ‘Non-linear’ equations. Till then the large number of calculations required could not be done manually and since most technological applications were mechanical (or one can say ‘ordered’) nobody bothered about non-linearity or chaos. The Global weather problem was the first non-linear equation to be widely studied and Edward Lorenz showed in 1963 [1], how very small changes in weather patterns could precipitate huge changes thousands of miles away. He coined the phrase ‘the butterfly effect’ whereby he meant that a small butterfly flapping its wings in Peking could change the weather in New York. And this was prophetic indeed because the ‘El-Nino factor’ is now legendary. A small current in the Pacific has been empirically found to effect world weather.

In the early 1980s non-linearity gave birth to the fields of ‘Chaos and Order’ [2] and ‘Fractals’ [3]. The western scientists and mathematicians saw that in real-world problems there was no absolute size. As you scaled the solutions, that is looked at bigger or smaller sizes the same forms and designs kept repeating themselves endlessly. Chaos Theory and Fractals are today being applied to just about every subject ranging from economics, share prices to study of heart beats. The list is endless.

◊       In this paper we further show how the Sanskrit alphabet creates an isomorphism from external reality to discursive (unclear meaning) language. The non-linear arnava is harnessed in a collection of symmetrical varnas that act as a bridge between aham, the I-consciousness, and the creation that this consciousness looks back upon – to imbibe, to understand and to philosophize.

The meaning of ‘varna’

◊       Commonly, the units of vāk or speech, are referred to as the varnas . This means that they are the basic sounds, the phonemes. However, to my reading there is much more…..

varnah has two lineages viz. white etc. colours and stuti meaning eulogy, singing praise, panegyric. Thus it means both delineation of colours as well as delineation of sounds or varnam the letters, phonemes.

arunah is the name for the sun, for its red hue as it rises ; perhaps as a third meaning varna is the separation of the suns energies or rays. Apr 16, 2005
by admin
0 Comments
As the Vedic rishis sat in the serene foothills of the Himalayas, thousands of years ago, they meditated upon the mysteries of the Universe – the Unknown, the Brahman. Their silent...