Thus varna is expressed in the modern dhātukösh [7], dictionary of root verbs, as both varne and āvarne. The former means to choose, to limit ; while the latter means to cover, to hide.

As the mind selects little parcels of energy from the vast “ocean of energy”, that we have talked about earlier, it qualifies them as shape, sound, colour and so on. All this is varna, for varna is the intermediary between the Universal, the Unknown sea of moving energy (the jagatyāmjagat of Isāvāsyam Upanishad) [8] and our senses. For that which covers also exposes itself; reveals itself to the rest of us. This a very important concept : varnas are therefore units of ākritī, shape/form ; units of colour and they are the units of sound that appear as akśar, letters/phonemes, to our ears or śröt. If we were to take a small piece of clear glass and turn it towards the rising sun – it would partially cover the sun’s rays ; at the same time revealing a red hue and its own outline. This is how the varnas assist our minds in nomenclating and talking about the entire range of māyā.

The One remains, the many change and pass ;
Heaven’s light forever shines, Earth’s shadows fly ;
Life, like a dome of many-colored glass,
Stains the white radiance of Eternity,
Until Death tramples it to fragments.– Die,
If thou wouldst be with that which thou dost seek !
Follow where all is fled ! – Rome’s azure sky,
Flowers, ruins, statues, music, words, are weak
The glory they transfuse with fitting truth to speak.

It is the varnas which bring about “Life, like a dome of many-colored glass” into our senses by giving us the instance to talk about and identify the “Flowers, ruins, statues, music, words…”.

◊       Another beautiful metaphor for varnas comes from the writings[9] of Shri Sarvepalli Radhakrishnan (1888 – 1975), former President of India and a Vedic scholar of immense international repute says,

Māyā evolves a variety of names and forms, which in their totality is the jagat or the Universe. It conceals the eternal Brahman under this aggregate of names and forms. Māyā has two functions of concealment of the real and the projection of the unreal. The world of variety screens us from the real.

Some think Creation’s meant to show him forth,
I say it’s meant to hide him all it can.

“In Hindu thought, māyā is not so much a veil as the dress of God.” A dress serves two purposes – it hides and it displays. Likewise māyā can be likened to a scrim. A scrim is a thin canvas used in theater and opera in order both to show the audience shapes and colors and to hide what is going on backstage…..

The scrim therefore is like varnas , you illumine it from the rear and you can imbibe what is at the back ; you light it from the front and you can project on it like a cinema screen – the same varnas are used to utter the projected, spoken words.

◊       Graduating to vāk or speech from the level of akśhar or letters the Vedas say in Brihadāraṇyaka Upanishad I.6.1 :-

All that is manifest in the visible universe is covered by the triad viz. nāma – rūpa – karma i.e. name/number, shape/form and action/work. Of these as regards names, speech is the source, for from it all names arise. It is their common feature ; for vāni or the spoken word is the foundation of all names. This speech can be likened to the Brahman, the Unknown, for from our memory of learnt speech the known names filter into our consciousness, ultimately they are nurtured back into the realm of vāni or speech as we speak about things.

Now let us go to the alphabet itself…

Table 1. gives the complete alphabet. It is based on the Paniniya 14 Māheshwar sūtras. A detailed study has been given by Dr. Vidhātā Mishrā [10] in a critique based on the Śikśā and Prātiśākhya of the four Vedas. These ancillary texts were taught to the ancient śisya or students as prerequisite to the chanting of the Vedas.

svar is the name of the sun – it stands alone, dispersing darkness, it is the heavenly resonance, it lights up the luminaries or the other planetary bodies. svar is the shining light. This explains dhyauh – the celestial region, and its origin from the root word div, which means to be bright from within. 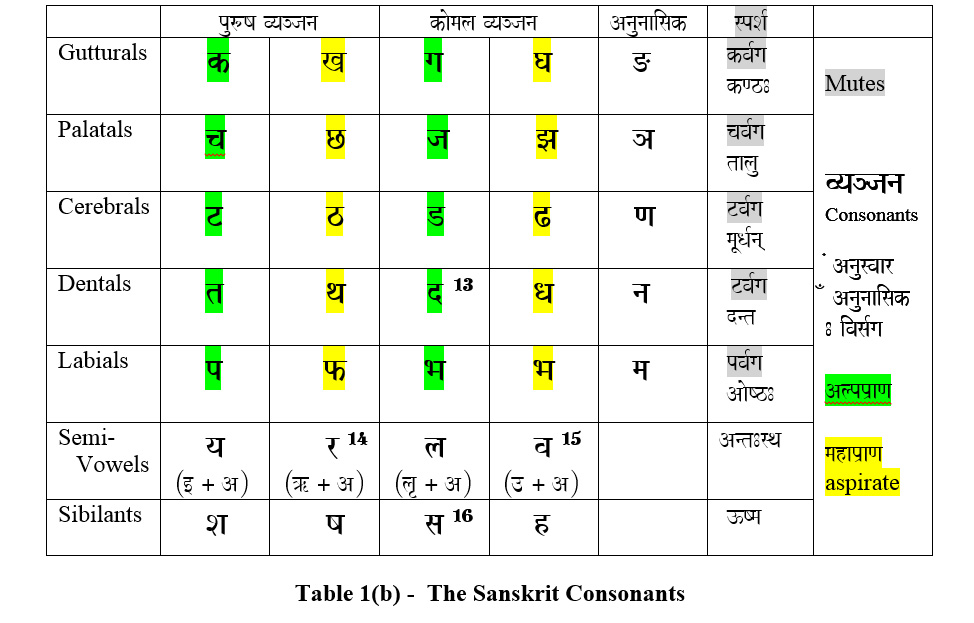 Now, there are two types of bodies in the Universe viz. (a) those that shine and emanate energy themselves and (b) those that reflect light that comes from others – they are themselves ‘dark matter’. In fact the scientists are estimating the ‘dark matter’, which also includes the ‘black-holes’, as far more than the visible matter.

◊      That the svars are the shining, pure phonemes is further confirmed by Brihadāranyaka Upanishad I.3.26 :-

He who knows that this Sāman, lyrical speech, is like gold obtains gold. For, indeed those svars, vowels or pure sounds are    su + varna, also the word for gold. This is the Veda, or knowledge of the gold-nature of the Sāman.