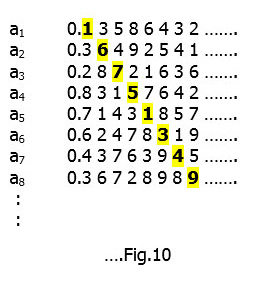 We imagine each a1, a2, a3   etc. to be a decimal number that continues indefinitely. In case it terminates (i.e. it is rational and is an exact fraction) then we will fill up the digits with zeros.

This means that all the decimals are listed out exhaustively in an infinite column (the labeling can be random ; one such ordering is shown in Fig.10). We next construct a new decimal number ‘b’ as Cantor pointed out – take the first digit of a1 and change it to obtain the first decimal of ‘b’ ; then take the second digit of a2 and alter it to get the second decimal of ‘b’ and so on move diagonally down the entire infinite column.[For mathematical precision the changed digits should not be either 0 or 9].

But, if our original list is complete then ‘b’ should be in it somewhere. The way Cantor constructed ‘b’ he ensured that it has at least one decimal digit different from each one of the ai’s . For example, if we say that an (‘ai’ with the nth index) is the same as ‘b’ – it cannot be so since the nth decimal of ‘an’ and ‘b’ are different by Cantor’s process of inception. Thus, a contradiction has arisen in our initial assumption. Therefore, the decimal numbers are ‘uncountably infinite’ and this infinity, א1 (Aleph – one) is higher than the ‘countable infinity’, א0 (Aleph – nought).

We go back to our original shlöka, the Shāntī Pāth and rewrite it using Cantor’s terminology as :-

Assimilating the infinitude of the א0 (universe), the א1 (Brahman) alone is left.

What at first reading of the Shāntī Pāth  sounds like a quibble on the word pūrna or ‘whole’ actually turns out to be a mathematically significant statement. It reflects on the very nature of continuity and its relationship with discreteness. The pūrnam adah is the Supreme Brahman, the integral whole that is paripūrna , attribute less and immutable. The pūrnam idam is also an infinity but like א0, it is quantifiable. The human intellect by its very process of comprehension relegates the Unknowable to an erudite graininess. This in essence is the very basis of Quantum Mechanics and Heisenberg’s principle. The pūrnam adah is the א1 the incomprehensible, unchangeable infinity that can give rise to as many א0s as desired and yet not be exhausted. Cantor used the rules of contradiction to show this. And similarly we have the neti – neti explanation in Brhad. Upanishad II.3.6 – Now therefore there is the teaching, not this, not this for there is nothing higher than this, that he is not this. Now the designation for him is the truth of truth…. S. Radhakrsihnan1.

Here the word pūrna refers in symbolic terms to the Supreme Reality which, remaining ever immersed in its integral nature, is always self resting. Gopinath Kaviraj has shed light on the sublime philosophical meaning underlying this verse which maybe summarized as follows. This verse attempts to bring out the nature of the Supreme Brahman in terms of the integral Whole which, as such, is beyond finite mind’s comprehension. It is always Full-in-Itself, the one without a second, and therefore suffer from any want or deficiency. It exists everywhere and at all times as the ‘one Whole’, the integral Reality. Being the sole Reality, it is the locus of both creation and dissolution of the world which is going on from time immemorial in the form of the play of its innate power, without affecting in the least its essential integral Nature. Looking from the mundane level, it has two aspects – the aspect which is capable of being apprehended by the mind denoted by the term idam, and the aspect which is beyond the reach of the mind that is indicated by the word adah . But, as a matter of fact, there is no difference whatsoever between these two aspects, because what once appears as within the reach of the senses due to the expansion of one’s capacity may well go out of one’s grasp when the powers of senses contract. It is beyond mutation or evolution. It is formless yet with form, attribute-less yet with all attributes, far yet near, all-pervasive yet transcendent. All contradictions lose their identity in it. All that emerges from It is also of the nature of all-inclusive Fullness. It may be likened to zero which symbolizes the infinity in the domain of mathematics. Any addition or subtraction does not make any change in it. It ever remains the immutable infinity. Thus the Supreme Reality is integral Fullness which is a corollary of its self-resting nature as the Absolute.

He is from Eternity to Eternity, and to Him nothing may be added
Nor can He be diminished, and He hath no need of any counselor.

A brief digression into the history of QM to prepare the reader because a few metaphysical concepts would be in order at this juncture.

In the late 19th century, Max Plānck (1858-1947) was studying the radiation of energy from spherical bodies made of different metals[14]. As these spheres were heated to higher and higher temperatures, they radiated heat waves and became incandescent. All these waves were found to be of electro-magnetic nature, as James C. Maxwell (1831-1879) had shown decades earlier. This research was known as ‘the Black-body radiation’.

Till Plānck researched this problem, earlier theories had given impractical results. They were all leading to mathematical calculations resulting in these heated spheres emanating infinite energy. The experiments, however, did not tally with this. Empirical measurements always gave limited energy values spread over a finite range of heat/light frequencies (or electro-magnetic waves). Plānck had a brilliant insight. He assumed that the energy waves left the ‘Black-body’ in discrete packets and not continuous waves as previously thought. He called these limited packets of energy quanta. They were also later termed as photons since the radiating body also emitted light. This new assumption lead Plānck to a mathematical formulation[15] that corroborated precisely with the observed experimental data. Sep 28, 2010
by admin
0 Comments
The ‘h’ sound is also present in every alternate Mute or Sparsh, leaving the Anunāsiks or Nasal-stops. Of these twenty balance Sparsh (ka, kha, ga, gha, cha, chha etc.) the ten without...