The ‘h’ sound is also present in every alternate Mute or Sparsh, leaving the Anunāsiks or Nasal-stops. Of these twenty balance Sparsh (ka, kha, ga, gha, cha, chha etc.) the ten without the aspirate are alp-prāna, while the ones with the aspirate are called māhā-prāna. The primary svars are ‘a’, ‘i’, ‘u’, ‘ri’ & ‘lri’. (The latter is rarely used in literature). The first three ‘a’, ‘i’, ‘u’ are the fundamentals since to pronounce them the tongue is not deflected. (The same is true also for the aspirate ‘h’). ‘ri’ and ‘lri’ are half-way between vowels and consonants since the tip of the tongue is used in pronouncing them.[17] In fact the Śiva Sūtras [18] terms these two vowels as ṣhandaḥ or eunuchs. All these five vowels are of single sound i.e. of one mātrā. As these mātrās or long and protracted sounds come into play, the chhands are formed and we will look at these again later.

With the addition of the ‘a’ and ‘h’ sounds, the Mutes become twenty seven and this is the number of the lunar constellations in the Vedic system [19]. Each constellation marks thirteen degrees and twenty minutes of arc in the zodiac.

The Semi–vowels are the Antahsthah for they reflect the inner energies. Their significance in the body Chakra system of Tantrās is that they comprise the bīja mantrā for the lowest four body Chakras viz.’ya’ for the Heart or Anāhat Chakra ; ‘ra’ for the Navel or Maṇipūra Chakra ; ‘va’ for the Genitals or Swādhisthān Chakra ; ‘la’ the lower Pelvic or Mūlādhāra Chakra. The interesting symmetry in these Antahsthah is that their sounds are structured by the reverse combination of ‘a’ with the rest of the four primary svars. This is somewhat like the combination of the nucleotides C, G, A and T in the DNA structure.

We have seen here how an isomorphism from external reality to discursive language has been created. Thus, as we speak the first vowel ‘a’ to the last mute ‘ma’ – the glottis to the labials are traced and the entire mouth is virtually ‘shaped’ in the varṇas or letters. This is the universal ‘aum’.

Before getting to the Shaktīs we will look at one more concept – the western idea of infinities.

[21]On the mathematical side in 1870, George Cantor (1845 – 1918) gave us the ‘set theory’ – a brilliant thesis on the study of collections of numbers, points, objects, anything really in general. This revolutionized ‘number theory’ and gave rise to his– ‘Theory of Infinities’ or what is more precisely called ‘Cantor’s theory of Transinfinite cardinals’. The word transinfinite here maybe understood as a condensed form of transcendental Infinite – that which is beyond the infinite. How is this possible? Let us, at this point, push our limited reasoning on the lines of Cantor and attempt to explain this brilliant equivalence between – mantrā and math.

Till the mid 19th century the only concept of infinity, in the mathematical world, was linked to ‘countable numbers’ or integers or natural numbers – as they are commonly known. As we count we go:-

Here ‘n’ stands for any countable integer. At the end of this seemingly endless sequence the number becomes too large to count and is denoted normally by ‘∞’. Cantor called this set א0 (Aleph–nought) a “countable infinite set”. Now obviously if we add or subtract any number from א0 it remains unchanged i.e. א0 +1 = א0 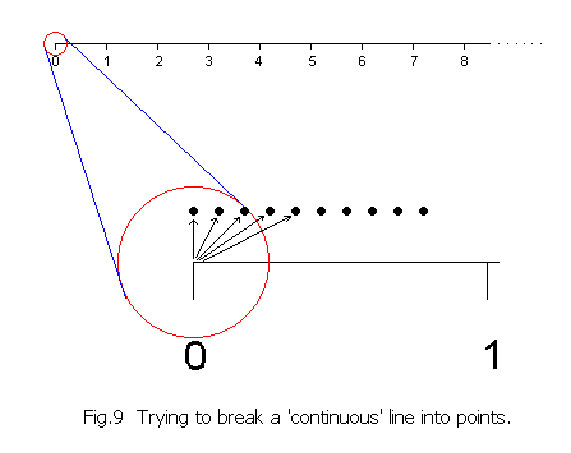 Not only this א0 + א0 is just א0: this is the very definition of infinity!

The earliest limitation of this way of thinking was probably expressed by Euclid (330–275 BC) when he tried to answer the question – “How many points are there in a ‘line segment’?” Now a line is a ‘line’; it is continuous and how can we talk about it as ‘discrete’ points? But then, that is what mathematicians are all about; they question what seems obvious and keep building a pyramid of well-grounded higher knowledge. In fact Euclid’s axioms and theorems are even today part of elementary school Geometry. But he could not answer this one!

René Descartes (1596–1650) had developed the idea of graphical representation, whereby, he had represented ‘real numbers’ by the length of a line and defined a co-ordinate system accordingly. Thus a horizontal line can represent ‘real numbers’ from zero onwards.

Cantor pushed his mathematical reflections on set theory and the ‘infinitely many’ further. He showed that there exist sets with an ‘infiniteness’ which is ‘beyond countability’. For this purpose, Cantor used a line segment as a measure for ‘real numbers’. Whereas ‘natural numbers’ belong to the sequence 0, 1, 2, 3, 4, and so on.. the ‘real numbers’ are those which are integers with a decimal placed between them somewhere e.g. 1.291 or 0.3125 or 365.89 and so on and so forth. These are also known as decimal numbers. In real life, we use ‘real numbers’ for measurements, weights, scientific calculations, cash transactions etc.

Cantor showed that if we take, let us say, just the line segment from ‘zero’ to 1, we have a set of numbers like: