Mishraji sums this up in a paragraph Sub-titled ‘From Linear Time to the Spiral of Time’[29] in his chapter on –‘The Space-Time Continuum’ (quote) –“The ancient Indian concept of time as described in the texts begins with its linear state, then moves on to the view of time as vertical spirals of circles. The circle becomes larger at each successive level in the spiral, subsuming the previous circle. As we move from the base of the spiral to the successive higher circles, we are called upon to widen our comprehension.”

Now let us see how this ‘comprehension’ that Mishraji talks about happens. In the visible universe, there are symmetries within symmetries like Chinese dolls. [slide] But however large or small, we may improve our external senses we, as humans, are still restricted to the realm of ‘Āpo’. Motilal Shastriji explains this ‘first layer’ as – all that is vyāpak[30] and the knowledge for this layer is governed by the richāein of the Rig Veda. These rik emanations converge as they move outwards in this vyāpak Universe[31] and this is the ‘ri´ Vowel of the Mātrikā Chakra. The inward emanations into the mana or mind are the Sām and they expand as they enter inwards into our consciousness. Every time we observe something that is part of this external reality or this vyāpak realm it is stored as bits of information in our minds. However large this information maybe over a lifetime these bits and bytes are part of the ‘countable infinite’ ‘sh’ and are stored in the first layer called Vishwa of our consciousness. Thus ‘sh’ and ‘ri’ combine to give us Shri. This observational knowledge is Yantrik. 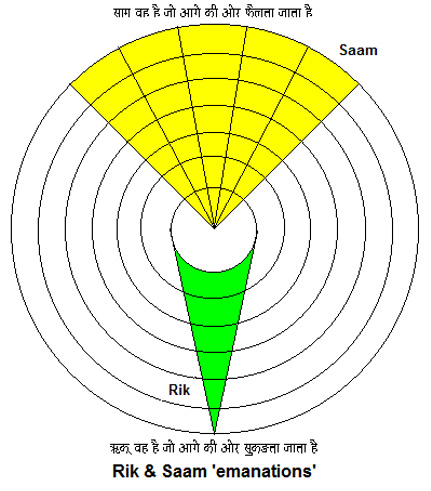 The next two layers are Mar & Marīchi[32] and governed by the Yajur veda – krishna (dark) and Yajur veda – shukla (light) respectively. Motilal Shastriji writes that the word Yajuh is the combination of both the vowels ‘i’ and ‘u’.

The Mar region is the non-visible region where the ‘dark matter’ exists and since it is not directly visible or vyāpak – it can only be inferred. This is the letter ‘u’. This is the Pitrlok externally and all these measurements in the mind internally can be confabulated upon creating a higher combination of infinities. Here, we build upon the observational part by continuous vimarsha. This region is the Sushupta, the next layer of our internal consciousness. It is akin to deep sleep where all the continuous processes of the body and mind connect. These connections belong to the higher ‘ind-enumerable infinite’ ‘shh’. Thus, the svar ‘u’ and ‘shh’ combine to give Uṣhā and the whole body of knowledge called Tantra comprises this domain. Thus from ‘sh’ to ‘shh’ we go by vimarsha.

From ‘shh’ to ‘sa’ the consciousness moves using gyān or insight and perception. This region can conjure up any number of combinations of ideas and interpretations and is therefore the Swapnalok. Literally the ‘dream world’ that can be ‘observed’ only by ‘inner light’ or driṣṭi. The knowledge of this region is externally contained in the Yajur veda – shukla and the region is Marīchi. This is the divyalok, the realm of the Devtās of Hindu mythology. It is equivalent to the Multiverse-I region in Tegmarks[33] explanation of Everett’s “The Many World Theory”, cited earlier. This is the ‘higher’ realm where all desires exist as ‘probabilities’ and only few gifted persons like the icchādhārī Yogīs can use it to make desires manifest. It is represented by the vowel ‘i’ and along with ‘sa’ it is Saraswati.

What we have outlined just now is also part of the Śri Tripura Rahasya and Mishraji has devoted the entire Chapter Eleven – ‘Pure Intelligence and Absolute Consciousness’[34] to this.

The very use of the two words – “Universe” and “Cosmos” distinctly shows the author’s attunement to the worlds beyond.

In the table below, I have given the summary of the information of this section so that we can finally look at a pictorial representation of the Tripura. 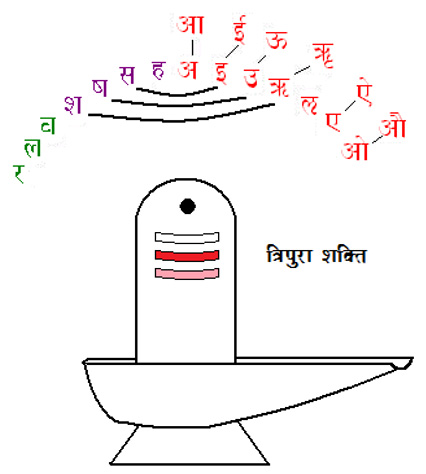 Looking at the Mātrikā Chakra, we see that as the three Shaktīs are connected from their Sibilants to the respective Svars they outline the three Tripura lines on the Shiva Linga below the Bindu.

Quoting Mishraji at the end of this, he writes (quote)[36] – “Thus we find that the concept of the Goddess in Sanatana Dharma is profound. Tripura Rahasya helps the seeker to comprehend the incomprehensible abstract intelligence, or supraphysical energy, which underpins absolute consciousness. There is no mythology here, at least in the sense in which that word is commonly understood. The stories and dialogues comprising these and other narratives in Tripura Rahasya help the student to hone his or her tools of comprehension and to understand the subtle and complex forces, principles and phenomena of our Universe”.

We have already studied the first two and we have been introduced to the third as Mātrikā Chakra but now we look at Wāk in more detail in this Section. It encompasses all sounds, both spoken and heard, and to this is added the rhythm of meter or chhand & tāl.