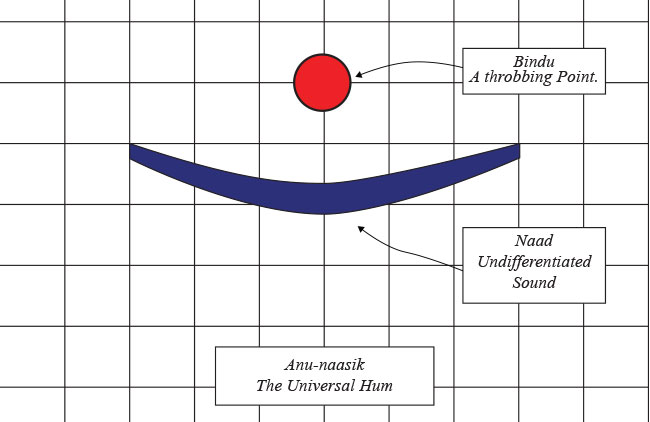 Naad-bindu, Dhyan-bindu, Amrit-nada and many other later Upanishads explain the unfolding of all creation and its names through Naad-Brahman and how a practitioner can attain ‘moksha’ or liberation. There is an outward evolution of sound from ‘eternal silence’ or anahat- naad[11] and then there is the involution through yoga and the chanting of ‘aum’. 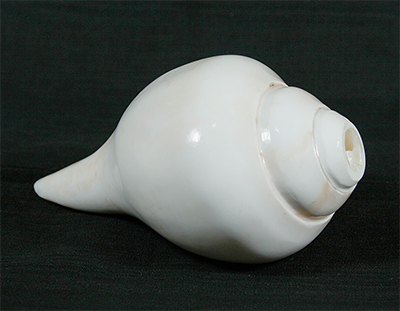 In yoga, while doing the pranayama or ‘breath-training’, the first step is to plug one’s ears with the thumbs of both outstretched hands while placing the corresponding little fingers lightly on one’s nostrils – one can hear this ‘Universal-hum’ inside one’s head. This is the first step in meditation. The deep breathing that follows synchronizes the practitioner’s pranic life-force with the universal shakti or energy. The expansion of this universal energy through the individual mind into human expression is called pranav – which, interestingly, is another word for ‘aum’ in all Vedic literature. When the conch-shell or shankh is blown in Vedic rituals it is symbolic of this praṇav, for it is the individual praṇa that combines with the vayu or ‘breath’ to bring about the resonance. 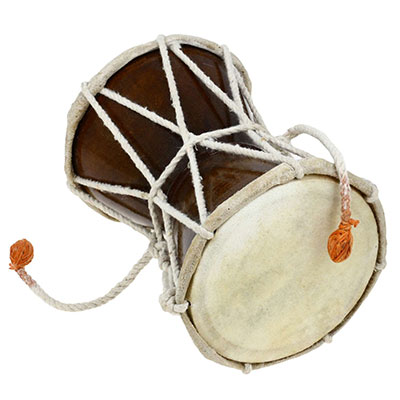 Thus the conch-shell and the damaroo are both symbols of Naad. Whereas the former signifies creative energy, the latter stands for destructive forces. In short, Naad encompasses all universal vibrations – their evolution and dissolution.

The ‘intent to act’ is called the samkalpa and is first felt in the mind as a thought, as an idea to do something. This latent desire is in the realm of anahat- naad and is also called the para-vaak or the region ‘beyond speech’. It is constructed out of our previous experience, the learned language, the symbolic memory and so on. The desire precipitates a need, a reason or a sense of purpose – this is called vikalpa . The mind observes, it searches for ways and means to crystallize this thought. This is the second layer of speech and it is called pashyanti. The next & third stage is madhyama, literally meaning ‘in-between’, where the life-force or prana lowers itself into the heart through 22 nervous paths called nadis. These 22 paths constitute the collection of shrutis and the heart is also the seat of the fourth chakra called the Anaahat-chakra for this reason. The breath or vayu rises from the navel or nabhi, the seat of the Manipura-chakra, in a ‘tight knot’[12] and combines with the prana in the hridaya or heart. Till now the sound is unbroken. As the vayu emerges from the throat, the Vishuddhi-chakra it finds distinction, delineation into the various components of speech and this fourth stage is called vaikhari. Till here the Shiva- sutras follow, a 5th century A.D. scholar, Bhartrihari’s sphota theory of language. The sutras however add the matrika as the fifth stage of speech synthesis. Now, let us look at the string of Sanskrit alphabets in detail.

Jan 01, 2008
by admin
0 Comments
We can make a new fraction in between these two rational numbers by adding both the numerator and denominator together as follows :- It looks as if the rational numbers fill the...

Aug 11, 2001
by admin
0 Comments
Borrowing a root image from Western thought , R. diagnoses the people in Plato’s cave [9] as suffering from the persistent and false belief that the shadows are real objects…..The...