So this, the Brahman, is the very fabric of reality….and yet not reachable and at another place in the same Upanisad [9] the famous neti neti (not this not this) argument sums this up – ‘ Now therefore there is the teaching, not this not this for there is nothing higher than this, that He is not this. Now the designation for him is the truth of truth. Verily, the vital breath is truth, and He is the truth of that. 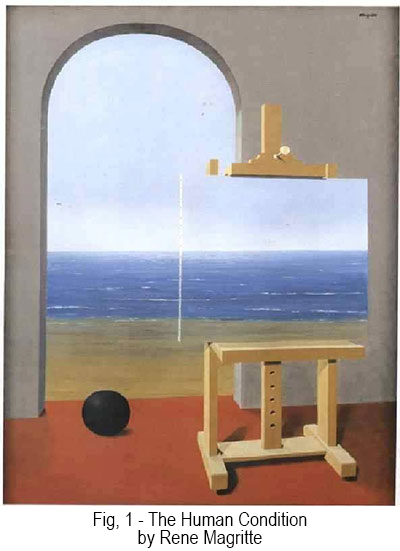 ◊       This limit which is inherent in the nature of things was tackled by the minds of a whole bunch of scientists like Bohr, Pauli, Schrödinger, Heisenberg, Dirac, De-Broglie which led to the development of Quantum Mechanics – this is best excerpted in the words[10] of John Wheeler (1911 – present), (a physicist, who worked with Niels Bohr the main force behind of QM) writes….

“Nothing is more important about the quantum principle than this, that it destroys the concept of the world as ‘sitting out there’, with the observer safely separated from it by a 20 centimeter slab of plate glass. Even to observe so minuscule an object as an electron, he must shatter the glass. He must reach in. He must install his chosen measuring equipment. It is up to him whether he shall measure position or momentum.[11] To install the equipment to measure the one prevents and excludes his installing the equipment to measure the other. Moreover, the measurement changes the state of the electron. The universe will never afterwards be the same. To describe what has happened, one has to cross the old word ‘observer’ and put in its place the new word ‘participator’. In some strange sense the universe is a participatory universe.”

Aug 09, 2009
by admin
0 Comments
Paṇinī, the oldest Indian grammarian who wrote his famous Asthadhyāyi few centuries before Christ, has explained a system of pratyahāra or abbreviation in which the first and the last...

Sep 28, 2010
by admin
0 Comments
Although Shiv has only 108 names in the Māhābhārata, the Shiv Purāna gives His thousand names. The Shiv-sūtras explain how the universal unfolding of the dimensions of Naad occurs in...